Despite the chaos at the Kabul international airport resulting from the hurried evacuation mid-August onward, the Afghan people fleeing their country tried to make the traumatic episode “more exciting and less scary” for their kids, a British airman involved in the rescue operation said.

Sergeant Andy Livingstone, a 31-year-old loadmaster in the 70 Squadron of the Royal Air Force (RAF), was involved in three evacuation flights to rescue more than 350 Afghan nationals and 200 British troops.

Speaking to the Independent, Sgt Livingstone said the evacuation at Kabul airport was the “most rewarding” thing he had done in the last 10 years. The airman said he was moved by the sight of families doing their best for their children despite the traumatic and desperate circumstances prevailing at the airport.

“People had their little girls in their best party dresses and the little boys in their nicest clothes, their good shoes. All the parents tried to make it more exciting and less scary for the kids,” Sgt Livingstone said.

“And it was nans handing out sweets and chewing gum, and it was the dads doing the dad thing of making sure the kids were sitting down, and it was the mums trying their very, very best to look after the kids,” he added.

“All that was going through my mind, was, ‘if that was my family, what would they want?’ And what could I do to make that couple of hours a little less scary? Because these are people who have got one bag for a family one backpack for five of them,” Sgt Livingstone said.

‘Anyone would have done the same’

On his second trip, Sgt Livingstone was to help pick up 153 passengers from Kabul on a C-17 transport aircraft and fly them to Dubai. He recounted how, on the flight, he took care of a two-week-old baby who was “rolling off” from her mother’s lap as she was “absolutely exhausted”. 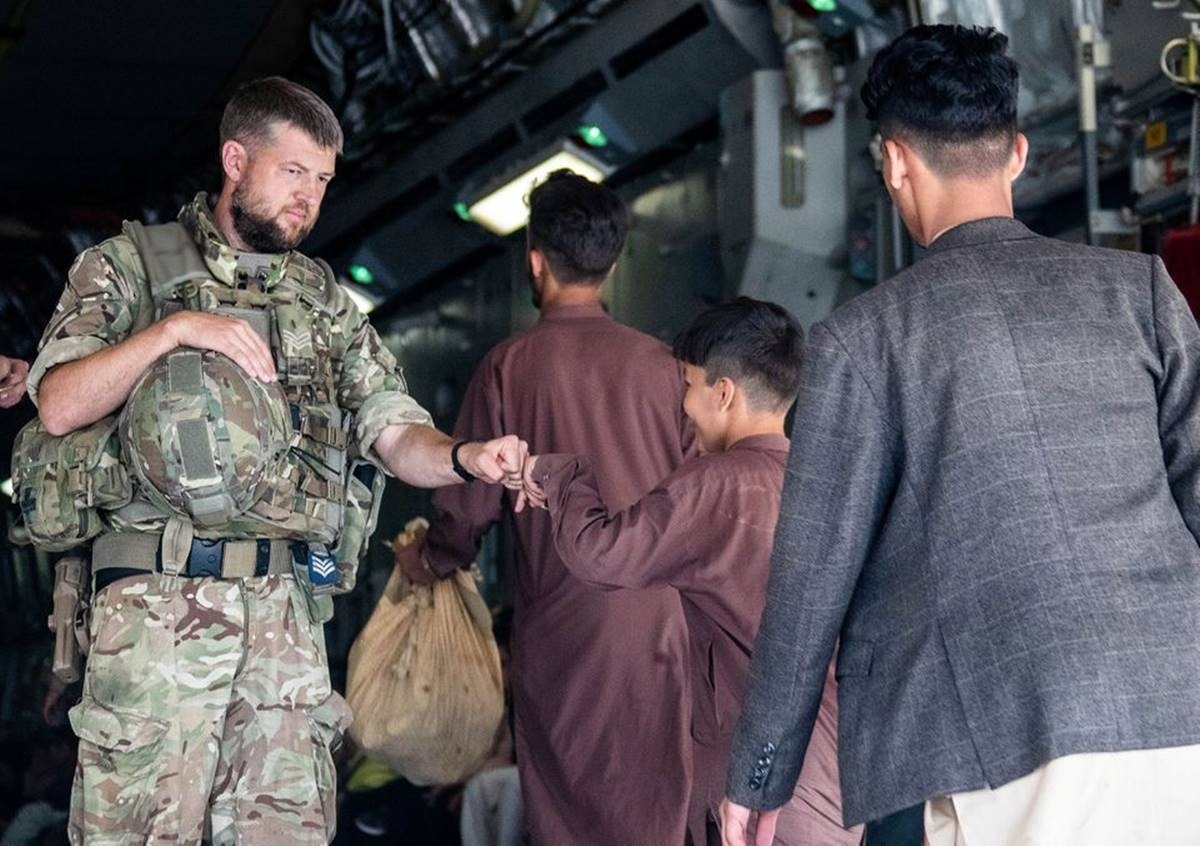 A member of the UK Armed Forces bumps fists with a child as he continues to take part in the evacuation of entitled personnel from Kabul airport, Afghanistan. (Photo: Reuters)

Sgt Livingstone, a father of two, said he strapped the baby to her mother’s body using the seat belts but the woman, who was barely conscious, could not hold the baby. “So I went over and said ‘you really need to sleep please let me take this baby off you for half an hour just so you can shut your eyes anything that will make you feel better’,” he said.

While the woman could not speak English, she understood the RAF sergeant’s gesture and handed him over the baby. Sgt Livingstone put headphones over the baby’s ears to protect her from the aircraft noise while she slept.

“Anyone of the crew would have done exactly the same. Anyone who was in that position would have done the same just to give her a bit of respite, and to give this baby a bit of a break as well,” he said.

“I find it really hard to describe. I cannot say there was gratitude, she was a woman who had seen her family go through too much, looking at me as if to say ‘Is it okay? Can I go to sleep now? Is my baby going to be okay with you?’ I’ll never forget it,” he added.

Sgt Livingstone said the experience was very emotional as he could see his life “reflected in their lives”.

“Once you superimpose what they are going through on your own life, it really does break your heart. But when you do come home, there are no words to describe how humbling it is and how appreciative I am of the life that I lead,” Sgt Livingstone added.

‘There was exhaustion and relief’

The passengers on the flight ranged from one-day-old babies to grandmothers, people in wheelchairs and casualties on stretchers who had been injured in bomb blasts at the airport in Kabul.

“There was exhaustion and relief. There wasn’t any chat. There wasn’t a conversation. If people were talking to each other, it was the bare minimum,” Sgt Livingstone said.

“No one had anything else to say. No one had the energy to say anything else. Just a lot of people staring at the ground or sleeping … I think about those flights quite a lot,” he said.

(Inputs from the Independent)

Also Read: How Taliban helped in evacuation of US nationals from Kabul airport

Helen Flanagan’s daughters have a stylish link to Princess Charlotte

No Parties, No Problem: How Fashion Is Selling Holiday Clothes in 2020 | BoF Professional, News & Analysis