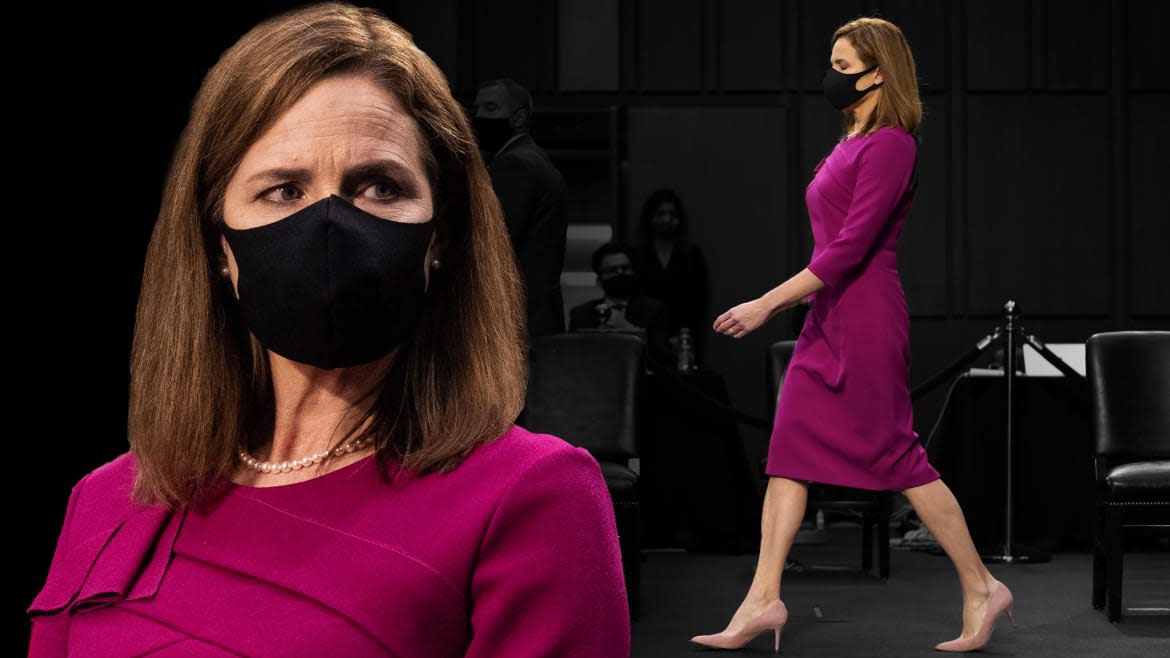 Amy Coney Barrett’s beet-pink dress spoke before she did: it looked sensible, practical, and stoically feminine, an image she aims to project.

It was a pretty dress, maybe even stylish by D.C.’s standards. A flat bow rested on her right shoulder, just underneath a string of pearls. The justice picked a very nice outfit for her first confirmation hearing. Too bad it was curated for such an ugly, rotten process.

The dress stood out in a room full of anodyne blue and black suits; it spoke of soft prettiness when the proceedings are about the very opposite. Her outfit radiates a maternal warmth, an easy comfort. It hides her staunchly right-wing record. It masks the harm she has the potential to enable once confirmed against women, LGBTQ people, all of those with Obamacare, and victims of voter suppression.

The deep pink color of Barrett’s might not be youthful, exactly, but there is some life to it—underscoring her relatively young age for a Supreme Court justice. Barrett’s 48, like Brett Kavanaugh’s 53, means a long tenure. This dress, with its saccharine design, serves as a reminder of that.

Barrett’s dress made a statement. So did the Democratic women lawmakers at the hearing. Senators Kamala Harris, Dianne Feinstein, Mazie K. Hirono, and Amy Klobuchar all wore bright blue blazers, the color of their party.

Hirono and Klobuchar put Ruth Bader Ginsburg enamel pins on their lapels. Kamala Harris, who Zoomed into the meeting, had a copy of the children’s book I Dissent on a table behind her. A cartoon of RBG wearing her judge’s robe and famous collar smirked back at the camera.

If the Democratic sartorial coup spoke loudly, Barrett’s dress had a quieter impact. In her opening remarks, Barrett spoke of her devotion to family. She peppered in sweet details about each of her seven children. She mentioned that her mentor in college, an English professor, gifted her a copy of Truman Capote’s collected works upon graduation. (Was the subtext that she is anti-LGBTQ?)

The dress labored overtime to quell certain fears. How could anyone who looks this safe be a threat?

Barrett showed up to the hearing outfitted as the caricature of a mother, or at least the right’s archetype of one. Outfits can do a lot to create a reputation or communicate values. Barrett’s gender and family are seen as an asset by the conservative men who loudly support her, and this placid dress is a perfect sartorial vehicle for her and them.

Thom Tillis, a senator from North Carolina, propped Barrett up as an avatar of women’s empowerment during his statement. He said she had signed two copies of the Constitution for his granddaughters, writing “Dream big” alongside her signature. He called Barrett an “inspiration to millions of young women in this country.”

Lindsey Graham said, “This is a vacancy that has occurred through the tragic loss of a great woman, and we’re going to fill that vacancy with another great woman,” referencing Barrett’s takeover of the late Justice Ruth Bader Ginsberg’s seat. As if women are interchangeable. As if one exceptionally remarkable woman’s seat can be so easily filled a little more than three weeks later.

Amy Coney Barrett’s dress highlights the absurdity it was intended to lull. And it is, perhaps, a warning. Republicans are rushing this process, and she is happy to go along with them, dressed perfectly and properly.