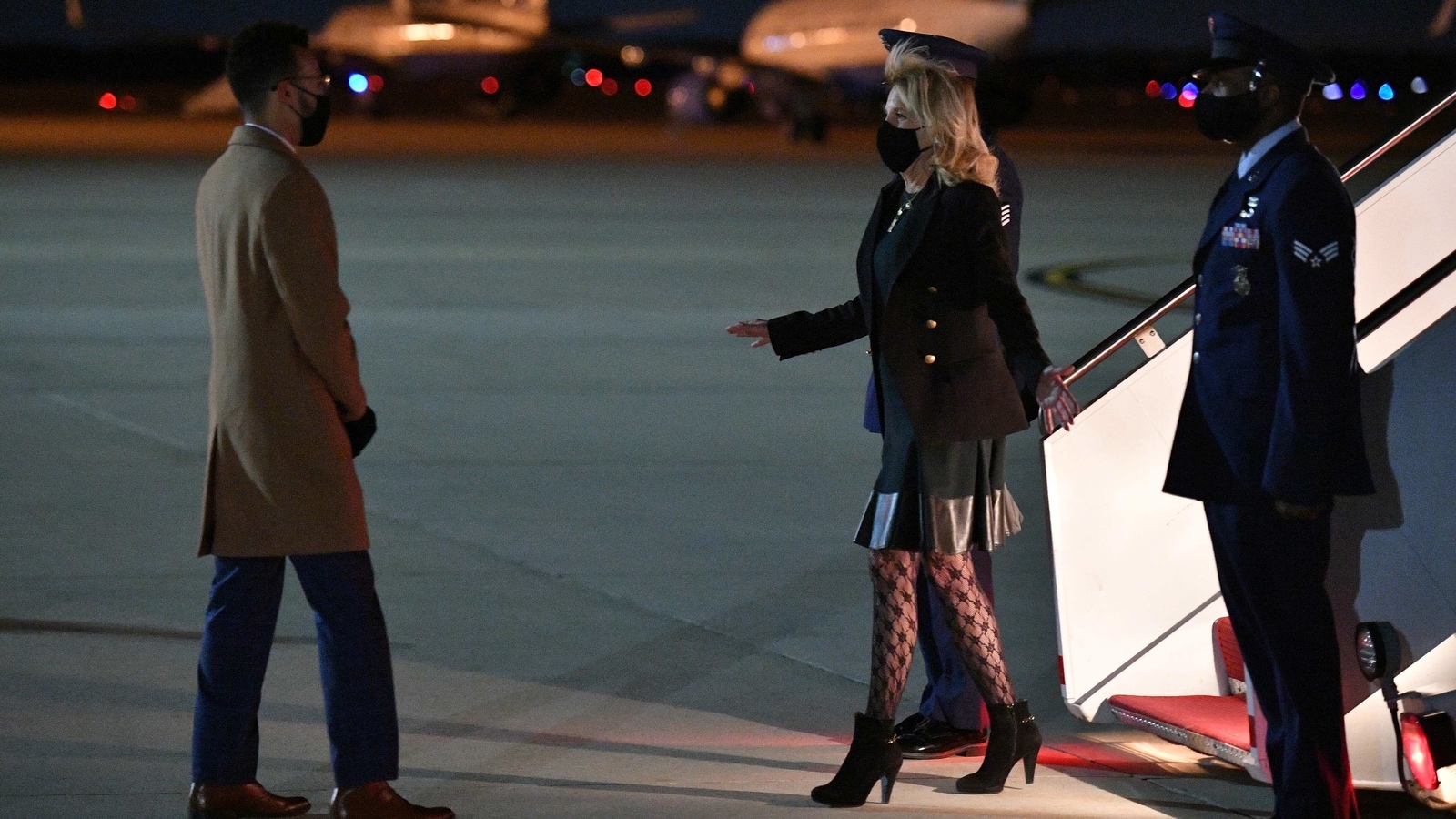 On April Fools’ Day the First Lady of the United States, Jill Biden played a prank on the passengers – including reporters and her own aides – on their flight back from California to Washington on Thursday. The light-haired First Lady got into a short, black haired wig, wore a mask and black pantsuit to match the attire worn by other flight attendants, and had on a nametag with ‘Jasmine’ written as she walked along the aisle during meal service passing out Dove ice cream bars. According to reports, the FLOTUS re-emerged a few minutes later exclaiming , “April Fools,” as she took off the wig to reveal her identity.

And though the prank did make some headlines, Jill Biden started to trend on Twitter on Sunday as people couldn’t stop talking about her choice of clothing when she deplaned Executive One. The 69-year-old wore black floral fishnet tights, black heeled booties, a semi-pleated leather skirt, over which she wore a black blazer and a black face mask. And while many praised the First Lady’s fashion sense, many of the conservatives on the Internet took to slut-shaming her for her choice of clothing, calling it inappropriate.

On tweet complimented Jill Biden saying, “It’s nice to have a FLOTUS with a sense of style,” while another read, “I’m not mad at her sophisticated sexiness. #FLOTUS #fashion,” a third one noted. Someone else added, “FLOTUS, go on with your bad self and rock those fishnets. Just remember that you don’t look like furiously angry plastic blow up doll.”

Sophisticated sexiness? This entire outfit can be found at Forever 21.

The bar is so low it’s unbelievable. https://t.co/fetne7GPLV

However, many Republican supporters compared Dr. Biden to former First Lady Melania Trump, calling the latter classy, “FLOTUS is a Fake Doctor but dresses like a real $5 whore. This is unbelievably bad. As if the country going to hell in record speed wasn’t enough. Can someone please DRESS this FLOTUS? This is a fashion crime.”

However a supporter wrote back, “Dr. Biden’s MASK in that photo was more fabric than Melanie ever wore in her boobies out ‘high fashion’ pics. I never shamed the ‘Einstein Visa’ recipient for being naked for cash all the time. Our current FLOTUS is classy. And her hosiery is no one’s damn business but her own.”

Some folks on Twitter are mocking Dr. Jill Biden because she wore an outfit that included fishnet stockings & boots. These are probably the same folks who were upset when Barack Obama wore a tan suit. (Some folks have way too much time on their hands.)

Jill Biden has always been quite the prankster and admitted in her 2019 memoir, Where the Light Enters, she admitted to the same. When her husband was vice president during the Obama administration, she once hid in an overhead bin on Air Force Two, frightening the first person who was unlucky enough to try to pack his luggage there. “I’ve always believed you’ve got to steal the joyful moments when you can,” she wrote.