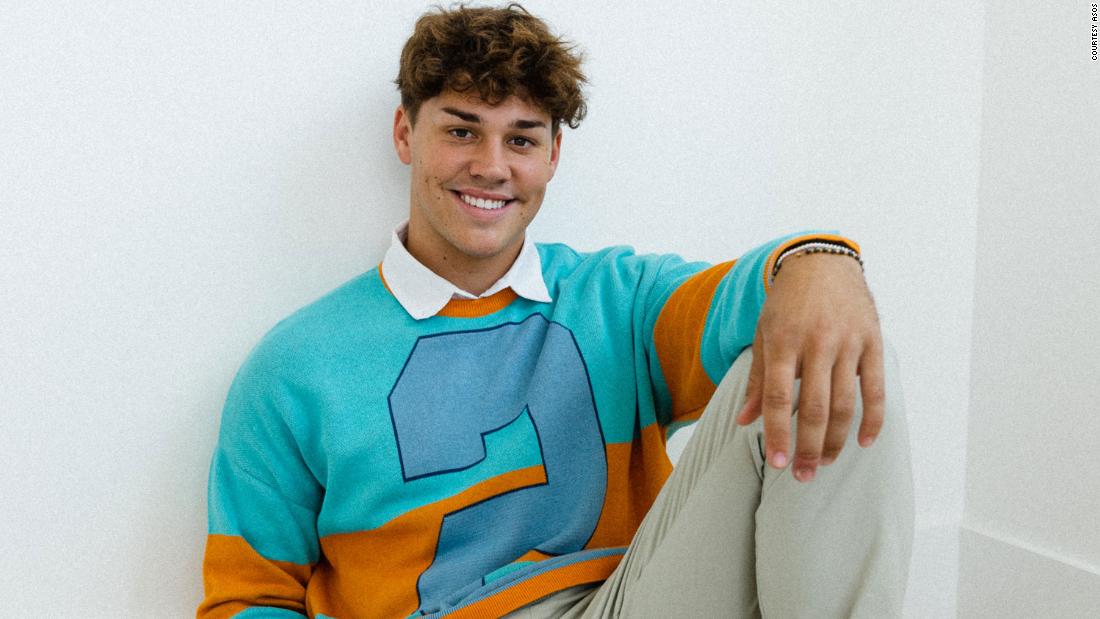 This story was produced as part of CNN Style’s partnership with Paris Fashion Week. See more coverage from the events throughout the year here.

It all started with a DIY lighting set-up. Noah Beck – the 20-year-old Arizona-born TikTok star with nearly 30 million followers – made his first videos for the social media platform by improvising late at night in his bedroom. This was about a year and a half ago, while he was home on holiday break from the University of Portland, in Oregon, where he was both studying business and playing soccer.

“I put nails in my wall to set up and hold a flashlight,” he said, laughing as he sat in a courtyard at the Park Hyatt hotel in Paris, during the city’s recent menswear fashion week. “I didn’t have a ring light at the time.”

Fast-forward through the onset and duration of the Covid-19 pandemic – the hyper-boost of downtime gave TikTok’s “creators,” as the app’s users are known, a captive audience – and Beck is now one of the most famous people on the platform.

In January, Beck was invited to watch the virtual Louis Vuitton fall 2021 menswear show as a VIP guest.

His ascent is marked by popular content trends that proliferate across the TikTok digiverse; videos of short dances, lip-syncs and largely unfiltered moments from the creator’s life. This is part of TikTok’s allure: Unlike those who came up as influencers on Instagram, the world a TikTok creator presents does not have to be polished and perfect. In fact, it’s better if it’s not.

But exactly why Beck went ultra-viral is hard to pinpoint, and he’s the first to admit it.

“It’s insane how fast I’ve grown,” he said. “I’m not sure why. There’s really no secret behind it. I was consistent, and posted things I enjoyed posting, whether they were trends or just things that made me happy.”

He’s also candid about one particular motivating factor: “There’s the attention that comes with posting a video, and the serotonin of getting notifications on your phone. That’s what kind of drives us as a generation now. As ridiculous as it sounds.”

Beyond regular and frequent posts to entice the platform’s algorithm, Beck’s good looks (yet not so good they’re alienating or traditionally model-esque) and confidence are a likely draw. (During our interview, two adoring fans cautiously approached him to ask for a selfie or a TikTok – Beck agreed to the former.)

He’s seemingly very comfortable with being visible (often with no shirt on) to millions of followers and seems to present himself as both relatable and aspirational in the eyes of his fans – dance videos are shot in the kitchen, or in front of a closet mirror, often alongside his girlfriend, fellow social media personality Dixie D’Amelio who, for the record, has double the amount of TikTok followers.

He also joined Sway House, a TikTok creator hub and residence in Los Angeles, in July 2020. There, with housemates who also had popular profiles, his audience was further augmented. In Beck’s case, the past year has added up to a kind of ultimate optimization of Gen-Z social culture and characteristics – and it seems a number of players within the fashion industry are taking notice.

Dixie D’Amelio on stage during the 2021 Billboard Music Awards in Los Angeles, California.

Fashion’s recent embrace of TikTok is notable, but it is not universal. And the hesitancy makes sense. The pairing is fundamentally odd: the luxury goods business has long been built around and fortified by high gloss finishes and big-budget exactitude, especially when it comes to image-making, and inaccessibility. TikTok is low-brow and mainstream, making it – for starters – more effective at reaching younger prospective clients.

At Celine, the brand’s creative director Hedi Slimane booked TikTok creator Noen Eubanks for a campaign in late 2019, a move that garnered multiple headlines among consumer fashion titles. Another star named Wisdom Kaye, who is known for his style-centric posts, is a signed IMG model, and has also partnered with Amazon Fashion. Tiktok stars were also beginning to pop up on the front rows of fashion week, until Covid-19 canceled most in-person events.

While there are many examples of fruitful partnerships in this space, there are also kinks to work out.

Bryan Grey Yambao (known as BryanBoy online) has been an influencer since the early fashion blogger days of the mid- to late aughts. With over 1 million TikTok followers and longstanding relationships in the industry, he is someone with whom many luxury brands have engaged on content creation.

Beck has made a splash in the fashion world as more brands realize the selling power of TikTok.

“Some brands have given control to the creators, which I really appreciate,” Yambao said during a brief interview at his hotel in Paris. “For me, when I’ve worked with Gucci, Dior, Prada or Valentino, they gave me complete freedom on what works for my audience and what works on my account.” But, he added, others aren’t ready to dispense with the polish. “If they’re super specific, if they are hesitant to give control, if they give you a million hashtags, (it) doesn’t work.”

Continuing, he said, “If you look at the most successful people on TikTok, they do relatable things. They’ll never be perfect. They’ll never show a perfect existence. Some brands are hesitant to let go of that.”

With Beck, the attention and momentum appears to be gathering. In January, he reviewed Louis Vuitton’s Autumn-Winter menswear show for Vogue. In March he was photographed for the cover of VMAN, a New York City-based indie fashion magazine. On it, he wore smoky swept eyeliner, fishnet stockings under jeans and high heels. The photo shoot’s creative lead was fashion director Nicola Formichetti, who is perhaps best known for his work styling Lady Gaga.

“It was exciting to work with someone who is super confident with who they are, and open to exploring and challenging different kinds of fashion,” Formichetti said. “There’s something about Noah. He’s the new generation’s Marky Mark.”

Beck has been in Paris attending the spring menswear shows.

The VMAN cover, however, didn’t land without criticism. Some internet users labeled the shoot as an example of “queerbaiting” or an opportunistic marketing tactic in which LGBTQ+ identity is implied as a selling tool.

This backlash, along with other criticism (he caught a lot of flak online for taking a trip to the Bahamas at the end of last year in the midst of the pandemic), must sting, but Beck said he’s quickly learned what to engage with and what to let slide.

“I don’t take any negative comments personally because they don’t know me personally,” he said, adding, “If someone leaves a hateful comment on one of my posts, I would love to sit down with them for five minutes. If they still feel the same way, that’s fine. I did what I could.

In Paris, though, Beck was elated. It was his first time in the city – his first time in Europe, actually. He’d been tapped by the brand AMI, founded by Alexandre Mattiussi, to participate in a series of videos designed to showcase the label’s newest collection while following Beck and another social media influencer, Larray, around the French capital.

Naturally, his time in the city is heavily documented on TikTok, there are videos of the throngs of fans gathered outside his hotel to see him, traditional French pastries, and his many outfits – courtesy of AMI (a break from his usual college-kid loungewear). A video of him playing soccer in Le Parc des Princes has accumulated over 11 million views.

Last year, Beck was an official partner of ASOS.

The first of three YouTube videos from his AMI sponsored trip to Paris are up on his channel now. Part 1, with over 350,000 views, is a roughly shot 8 min video blog of his trip – “I feel like I’m in ‘Ratatouille’ right now,” he says, wide-eyed, while being driven through the city.

Beck said he sees at least part of his future in fashion – and even expressed an interest in designing. He has dropped merchandise (hoodies and sweats under the moniker Ur’Luvd) through his social channels, but he said, “I want to get to the point where people buy clothes that I design, not even knowing that it has anything to do with my name. I think that’s the coolest thing. I would probably feel more accomplished that way. That’s the goal.”

For now, though, it’s about enjoying the ride while enforcing – always – that deeply relatable factor. “[When the phone is off], I’m doing the same things as everyone else,” Beck said. “At the end of the day I shower, do a little skin routine, maybe watch some Netflix. It’s still a normal life.”

19 Stylish DIY Bed Frames and How To Make Them