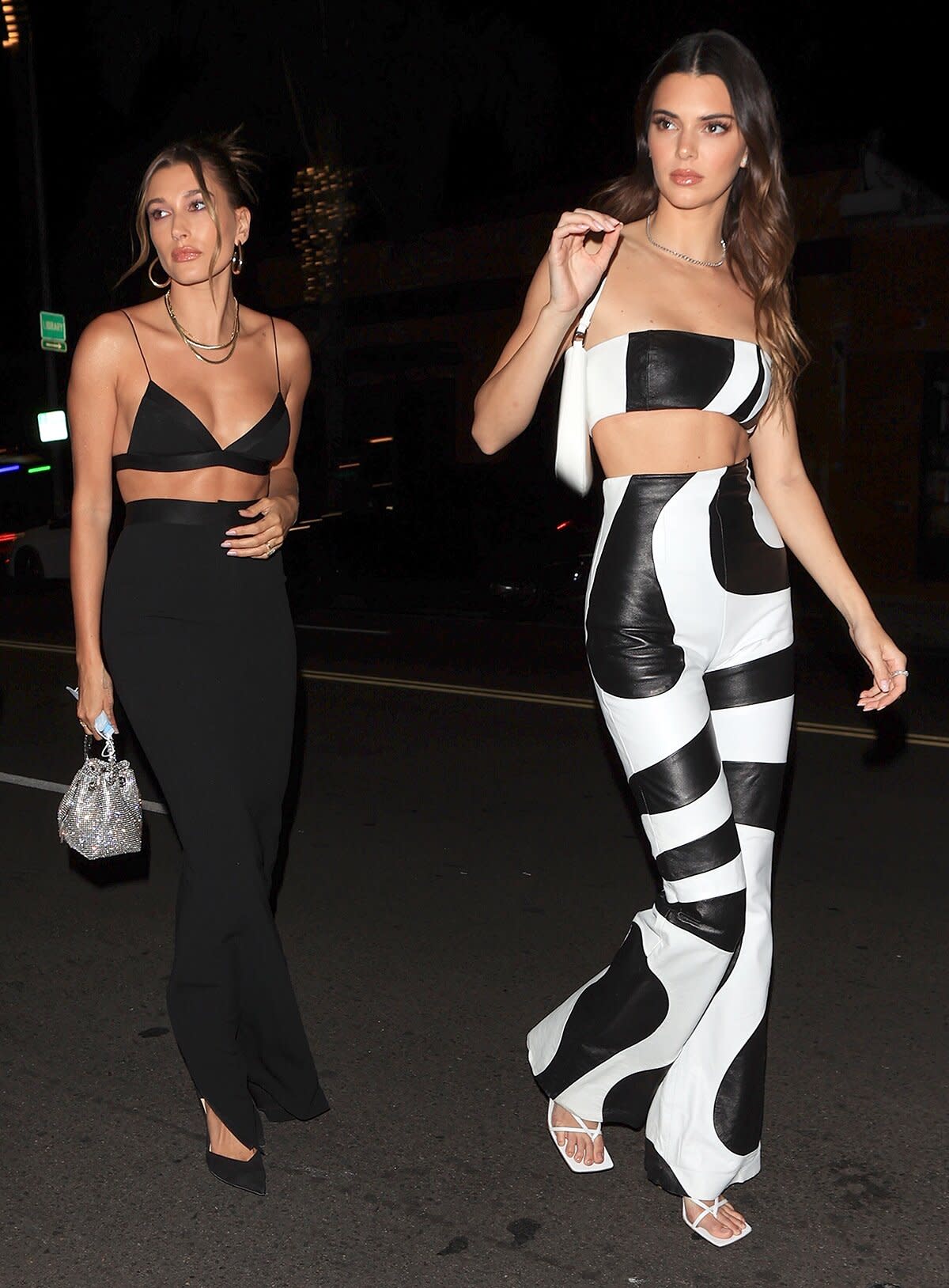 Kendall, 25, headed to the bash with friend Hailey Baldwin, 24, by her side, with each model rocking a midriff-baring ensemble. While Baldwin stuck with a monochrome black color palette, Kendall brought ’60s vibes with a colorblock leather bandeau and trouser set in a psychedelic black-and-white pattern.

Kylie, 23, was photographed driving to the party with birthday girl Stassie. While she hid her face from the flashing cameras, the Kylie Cosmetics mogul’s edgy zebra-print look could partially be seen from the photos.

Before she and Stassie headed out, Kylie threw her BFF an intimate birthday dinner complete with pasta dishes, baked chicken and and bottles of champagne.

The Jenner sisters’ night on the town comes just a few days before the series finale of Keeping Up with the Kardashians airs on E! after nearly 15 years on television.

RELATED: Twinning! Look Back at Kylie Jenner and Her BFF Stassie Karanikolaou’s Many Matching Moments

Following the anticipated series finale tomorrow, a special “Housewives-style” reunion will air with the cast, hosted by Andy Cohen and covering the entire series. “We’re gonna cover all 20 seasons of Keeping Up with the Kardashians in a kind of Housewives style reunion show and so anyone who watches the Kardashians, I want you all to tweet using the hashtag #KUWTKReunion, we need really good provocative questions and nothing’s off-limits with the crew,” Cohen said.

After 20 seasons on the air, the Kardashian-Jenner family announced last September that the 20th season of KUWTK would be the last.

“To our amazing fans – It is with heavy hearts that we’ve made the difficult decision as a family to say goodbye to Keeping Up with the Kardashians,” Kim said in a statement shared on Instagram. “After what will be 14 years, 20 seasons, hundreds of episodes and numerous spin-off shows, we are beyond grateful to all of you who’ve watched us for all of these years – through the good times, the bad times, the happiness, the tears, and the many relationships and children. We’ll forever cherish the wonderful memories and countless people we’ve met along the way.”