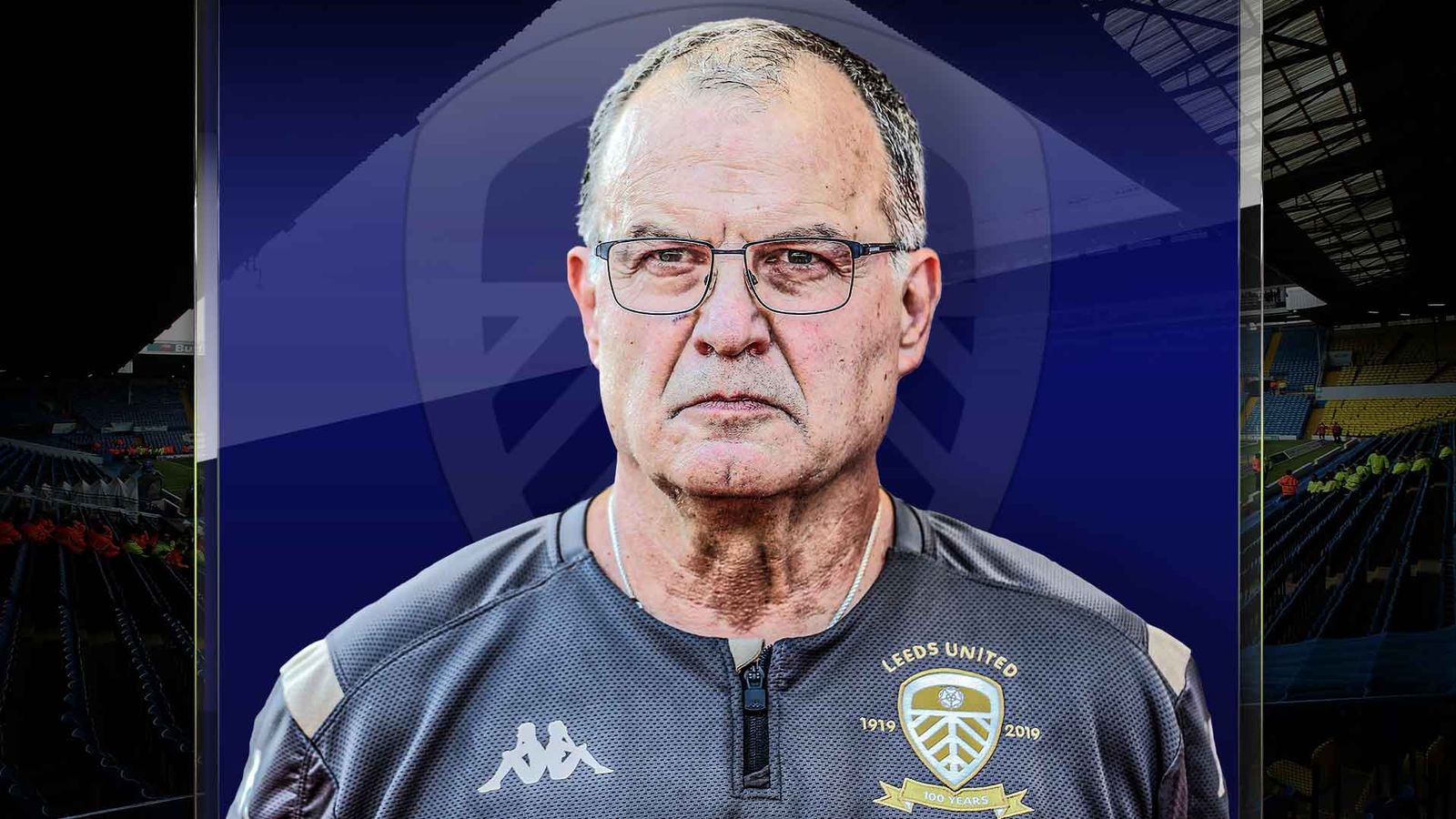 Marcelo Bielsa is in full flow. The Leeds manager has just finished an hour-long press conference in which he discussed topics ranging from concussion protocol to Basque identity and the conversation continues with Sky Sports straight afterwards.

We are back onto the subject of Leeds. On Sunday, the Yorkshire side face old rivals Manchester United in the Premier League for the first time in 16 years. Having ended their exile from the top flight, Bielsa is now tasked with re-establishing their presence there.

It is not an easy assignment and events of the last few months prove it. Leeds may yet achieve the top-half finish many tipped them for but right now they sit 13th having only recently ended a run of poor form which threatened to push them towards danger.

Results have been mixed but Bielsa’s devotion to his full-throttle style of play is total. That much has been apparent since he started the season by man-marking Liverpool all over the pitch, throwing bodies forward with a level of attacking intent rarely seen by an away side at Anfield. “I think they’ll scare the living daylights out of some teams,” said Sky Sports pundit Gary Neville.

It took a late penalty from Mohamed Salah to deny Leeds a draw that day and Neville’s prediction has rung true since. But there have also been emphatic defeats. They were beaten 4-1 by Leicester and suffered the same fate against Crystal Palace a week later. Wolves, Chelsea and West Ham have got the better of them too.

“We haven’t always managed to impose our style,” Bielsa tells Sky Sports, speaking over Zoom from the club’s Thorp Arch training ground. “In fact, there have been more occasions where we haven’t managed it than ones where we have.

“In the Championship, our matches were all very similar. But every game we play in the Premier League is a different challenge to the last one. There have been good moments and bad moments, good games and bad games. We are working on it but we are not a consistent team yet.”

“A ‘Plan B’ is like an anxiolytic, something which can reduce anxiety,” he says. “What I want to happen hasn’t happened, so I demand that you stop what you are doing and you do something different.

“Obviously, if that something different turns out to be effective, it will be seen as a success. But from my point of view, what you have to decide as a manager is whether to completely replace the structure you are trying to build, or whether to just correct what doesn’t work about it.

“Every manager has his own profile and they try to maintain that profile while conserving the things that are good and removing the things that aren’t. There are very few managers who jump from one style to another and that’s because establishing a style of play is very, very difficult and is linked to your way of interpreting football.

“This is not intended as a criticism of anyone, but if someone stops thinking the way they think and starts doing the opposite, then that is difficult to make work in football. To give up on your convictions is not a good way to move a project forward.”

And besides, why change a formula capable of yielding results like Wednesday’s thrilling 5-2 victory over Newcastle? Leeds went into the game having lost four of their last six in the Premier League but produced a performance Bielsa regards as their best of the season.

“There is a very important detail about the game which very few people have noticed,” he says. “In the first half, we created a lot of opportunities and had a lot of possession. The opposition manager noticed this and took a number of steps to change it at half-time.

“I don’t know exactly what the steps were, but the opposition ran much more in the second half than in the first half. Normally, this would have changed the course of the game. But despite the fact they multiplied their efforts, we continued to maintain our supremacy over them.

“In other words, we neutralised their reaction. We played the entire game in the same way, which is very difficult to do.”

Leeds secured that victory with three breakaway goals in the final 13 minutes at Elland Road, suggesting the pre-match talk of burnout – it has come early this year – was at best premature.

Premier League tracking data offers compelling evidence of that too. So far this season, Bielsa’s side have outrun their opponents in every game – and by an average of 4.3km. They were the fittest side in the Championship and they hold the same status in the top flight.

It is a source of immense satisfaction to Bielsa.

“Running reflects the energy you put into marking and defending, but it also means the person who has the ball has more options for where to pass it because there is more movement around him and therefore more difficulties for the opponent,” explains Bielsa.

“It also means that if you lose the ball in a good way – that is to say, at the end of an attack rather than during the construction of an attack – you are able to defend better high up the pitch because you have players there and you are not disorganised.”

Bielsa’s playing style is inherently risky so it is perhaps unsurprising that they have been punished at times following the step up from Championship to Premier League this season.

There has been vulnerability from set pieces and from open play too. Only 19th-placed West Brom have conceded more goals.

Another manager might have urged greater caution but Bielsa’s instincts take him in the opposite direction. His solution is not to sit back but be even more aggressive.

“Where I think we can improve is in our aggression to win the ball back and in the pressure we apply in the opposition’s half in order that they can’t get their attackers into dangerous positions,” he says.

As for defending set-pieces, it is about limiting the opposition’s opportunities rather than changing the way his side deal with them.

“We need to be more careful about committing fouls,” adds Bielsa. “It is an equation which is very difficult, but you have to look at the danger of an attack at the point a foul is committed, and compare it to the danger there would be after a foul, when the opposition have their free-kick. It demands a lot of maturity to understand which situation is more dangerous.”

Bielsa’s primary focus, though, is to make his side more potent at the other end of the pitch. So far this season, Leeds rank second only to Liverpool for shots and expected goals. But taking their opportunities has been an issue throughout the Argentine’s tenure.

There have been signs of progress lately. Leeds have scored 22 goals so far with Patrick Bamford accounting for nine of them. But the 27-year-old has still missed more big chances than any other player in the Premier League. His total, in other words, could and perhaps should be even higher.

It is a conundrum for Bielsa to solve but he takes encouragement from the frequency with which his players are putting their team-mates in the right positions.

“The only way to improve efficiency in front of goal is by creating chances which are easier to score,” he says.

“It’s very easy to say to a player, ‘Don’t miss!’ But that player is just going to answer, ‘Well, I don’t want to miss!’

“It’s impossible to demand that from a player because of course the player already wants the same thing as you.

“There is a way to do it, though, and that is to set up your attack in order to generate scoring chances which are easier to take. Ezgjan Alioski’s goal against Newcastle, for example, was facilitated by a pass from Pablo Hernandez which put him in a great position.

“There are other ways to do it too, of course. Jack Harrison’s goal after Alioski’s is an example of a player taking a much more difficult chance. But if you create easier opportunities, then the chances of scoring increase.

“But we work a lot on the development of our attacking game because that is the most difficult thing about football.”

Leeds were certainly rewarded for that hard work against Newcastle on Wednesday and the hope now is that the same will apply against Manchester United. On his last visit to Old Trafford, in March 2012, Bielsa enjoyed one of his best nights in management, guiding a fearless young Athletic Bilbao side to a famous 3-2 victory he still holds dear today.

A repeat of that outcome on Sunday would surely surpass it.

If You Burn For “Bridgerton”, You Can Now Buy This Exclusive Merch