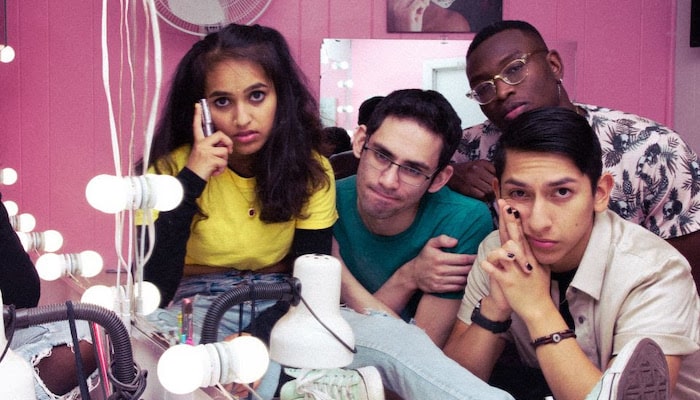 Baltimore-based band Pinkshift are redefining the pop-punk landscape with their debut EP Saccharine which dropped April 2. Over the past few months, Pinkshift have slowly released the songs that appear on the EP. Now, they have finally unleashed “Mars,” the final song off of the five-track release.

Taking inspiration from ’90s grunge and early ’00s punk rock, “Mars” is just a small taste of the nostalgic sounds heard on Saccharine.

Pinkshift truly didn’t hold back when it came to their debut EP. Each track offers a personal snapshot into the lives of vocalist Ashrita Kumar, guitarist Paul Vallejo, drummer Myron Houngbedji and bassist Erich Weinroth.

In particular, “Mars” blends together a relatable narrative with punk rock sounds reminiscent of your high school days. In fact, according to Kumar, Vallejo was listening to My Chemical Romance’s “Thank You For The Venom,” off of Three Cheers For Sweet Revenge, a lot while creating the final guitar parts on “Mars.”

Additionally, “Mars” is also a very important track in Pinkshift’s story. After writing the song years ago, they eventually decided to form Pinkshift and take their music to the next level.

Read more: 21 artists who are 21 years old or younger and taking over alternative music

“The lyrics of the song are about the beginnings of something shiny and new,” Kumar says in a press release. “Ironically this was the song that really pulled us together to start this band. It’s full of optimism and hope for a brighter future. It feels fitting to put a spin on our original demo this year for the same message with a touch of angst.”

“‘Mars’ is the first song we ever worked on together back in 2018,” Kumar tells Alternative Press. “We revived it to be the final puzzle piece of this EP. We originally meant to release it last year, but the pandemic changed our plans a lot. Figuring out a safe way to record, meet, everything—our minds were really shattered for a few months.”

Read more: 41 women empowerment anthems that should be played as loud as possible

Due to their sudden change in plans, Pinkshift had to rethink how they wanted to put out new music. After releasing the EP’s first track “On Thin Ice” in March 2020, the band eventually decided to incrementally put out the songs off of Saccharine before the EP’s final release date.

In July 2020, Pinkshift dropped their grungy track “i’m gonna tell my therapist on you” along with a lively DIY-style video. The visual shows each musician jamming while in quarantine during the pandemic. Ultimately, the home movie-inspired video highlights each Pinkshift member’s individual style.

Finally, in October 2020, Pinkshift debuted the intense pop-punk tracks “Rainwalk” and “Toro,” the latter of which they ended up completely rewriting. For Pinkshift, the experience of recording and releasing Saccharine during a global pandemic added a whole new meaning to their music.

“[Throughout] 2020, we grew in our music tastes, rewrote pieces—even writing ‘Toro’ from scratch—and became closer as a band,” Kumar tells Alternative Press. “This EP is really a pandemic project. [It] carries what was still good before we knew any better and hopes for a brighter future tomorrow.”

For their debut EP, Pinkshift teamed up with Baltimore-based producer Hansel Romero who vocal engineered, edited, mixed and mastered the final release. However, when producer Will Yip (Panic! At The Disco, Citizen, Movements) came across Pinkshift’s music, he eventually reached out about working with them. Soon after, he remastered all of the tracks on Saccharine for their limited edition vinyl.

Kumar tells Alternative Press that the working relationship Pinkshift have with Yip has been both inspiring and encouraging.

“Ever since Will reached out to us about our music last year, his support and friendship has been really special to us,” Kumar tells Alternative Press. “It was a lot to navigate the attention we received after ‘i’m gonna tell my therapist on you’ was released. He has been incredibly supportive with navigating that space. Just being around Will is really inspiring, and his love and drive to create good music fills the room–you can feel it. We’re incredibly humbled that he’s kind of taken us under his wing in supporting us.”

Along with the remasters from Yip, the limited edition vinyl includes exclusive artwork and numerous poster designs from artist Madison Schubert. As part of Bandcamp Friday, Pinkshift have launched the preorder for the Saccharine vinyl in black and pink variants which are both available here.

Following yesterday’s announcement, Pinkshift’s limited edition Saccharine EP vinyl sold out on Bandcamp. The band still have the black variant available on their merch store here along with posters and the original masters on CD.

You can still preorder limited-edition vinyl of Saccharine on our webstore, graciously remastered by Will Yip + posters designed by @mesknoxx + CDs of the original masters by @hansel_mp3 🪐💫☄️💥https://t.co/CyPyEY2IrG pic.twitter.com/kJ2BuphdL4

Saccharine is available to stream below.

Pinkshift are among the diverse group of acts featured in Alternative Press’ 100 Artists You Need To Know issue. The list includes an array of artists that are redefining genre landscapes including Maggie Lindemann, Rina Sawayama, Bad Omens and Chase Atlantic.

What are your reactions to Pinkshift’s new single “Mars”? Let us know in the comments below.

How to take striking and intoxicating photos, Anton Corbijn style