Psycho Bunny Hops Into Two New Malls, With More Stores On The Way 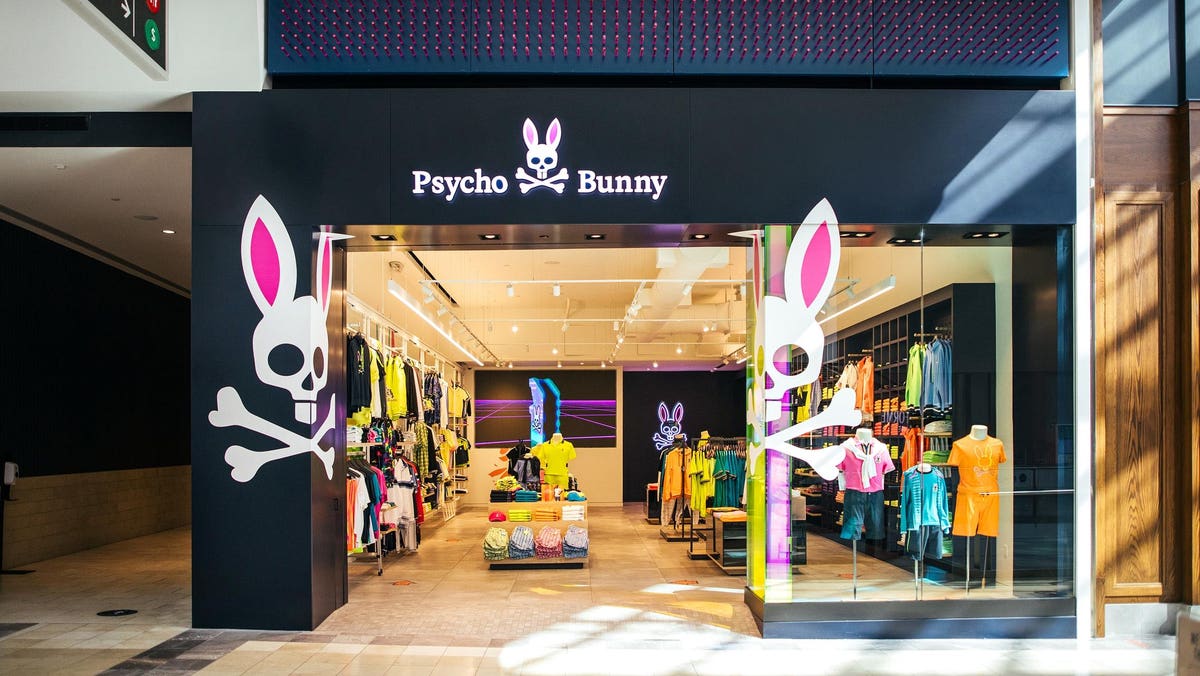 Psycho Bunny, the edgy menswear line best known for its polo shirts and its logo—a skull-and-crossbones with bunny ears—is betting on physical stores, and top U.S. malls, to grow its brand.

Psycho Bunny opened stores at Westfield Garden State Plaza in Paramus, New Jersey, and at the Macerich mall, Tyson’s Corner, in Virginia, at the end of March, and plans to add five additional locations in the coming months, bringing its store count to 15.

In what could be an encouraging sign for U.S. malls, Psycho Bunny has seen traffic rebound strongly enough at its older mall stores to make it confident about opening new ones.

“Provided that there’s opportunities in malls that meet our criteria, we think we can increase the pace of expansion somewhat,” Chief Operating Office Kenny Minzberg said.

The Garden State Plaza location gives Psycho Bunny its first retail store in the New York metro area. Pre-pandemic, the brand had expected that its first New York area store would be in Manhattan, but is now waiting to see how street-level foot traffic in the city rebounds before moving ahead with a New York City location.

Psycho Bunny, which also sells wholesale to departments stores like Nordstrom
and Bloomingdale’s, and direct to consumers on its website, has found that having its own retail stores can boost wholesale and e-commerce sales, and promote the brand, Minzberg said.

“We’ve seen that opening stores in a market really amplifies all channels,” Minzberg said. “They help our e-comm business but they also help our wholesale partners, by increasing the overall brand awareness,” he said.

For a brand like Psycho Bunny, retail stores in high-traffic malls like Garden State Plaza are “a very effective and efficient way to acquire customers,” Minzberg said.

The stores also give the brand a way to control the merchandise presentation, and connect directly with shoppers.

“It’s hard to beat being able to have our customers have their eyes and hands on the actual product and being able to interact with our team in person,” Minzberg said.

Psycho Bunny was founded in 2005 by Robert Godley and Robert Goldman. They initially sold ties and scarves to specialty stores and department stores, and then branched into polo shirts and golf apparel. It launched an outerwear line last year, and plans to expand its accessories offerings this year. It also has a kid-sized line of shirts.

The Psycho Bunny logo, which Godley designed, is intended to appeal to men who want an edgier mascot on their polo shirt than Polo Ralph Lauren’s galloping horse or Lacoste’s crocodile, with a price point somewhere in between those brands, at about $100 for a polo shirt. The brand believes that its attention to detail, with mother of pearl buttons, tapered seams, and vibrant pops of color, are also part of its appeal.

The brand has stores in Japan, and Mexico, Central, and South America which are operated under a licensing deal by retail partners in those regions.

Garden State Plaza is the third Westfield mall where Psycho Bunny has a store, after opening previously at Westfield Century City in Los Angeles and Westfield Valley Fair in Santa Clara, CA. A store at a Westfield center in San Francisco is scheduled to open in the late summer.

Psycho Bunny’s current store list shows it is targeting Class A malls in high traffic locations, and tourist destinations. The fact that the Bunny is betting heavily on malls is a good omen for those counting on a post-pandemic rebound in mall traffic.

How to take striking and intoxicating photos, Anton Corbijn style