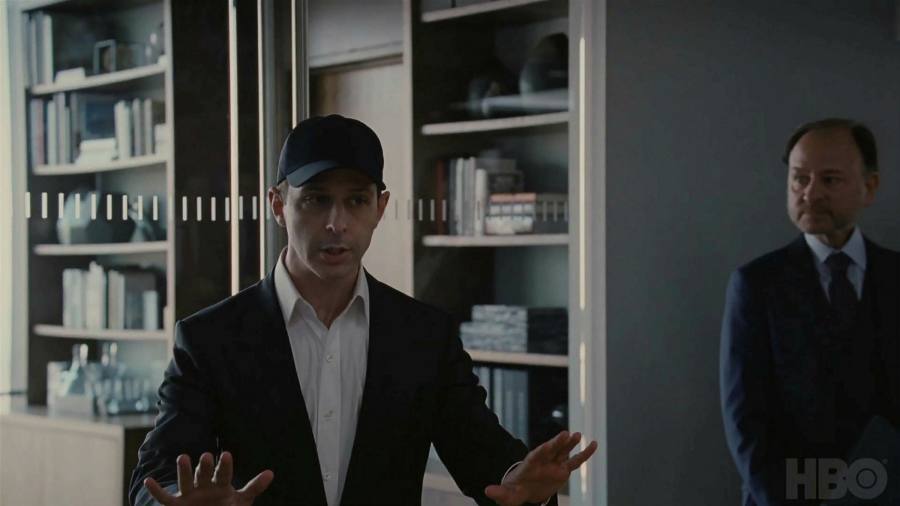 On HBO’s Succession, the media titan Logan Roy (Brian Cox) is the sun around which every other character orbits. He’s ruthless and emotionally withholding, both with his four adult children and his cadre of executives; nothing is as precious or rare as his favour and approval. Overprivileged and underqualified, the Roy siblings are jockeying to succeed Logan as CEO of his conservative news empire, Waystar Royco, back-stabbing and slinging snotty insults along the way. It’s their way of trying to win their dad’s love.

You might think about the costumes on Succession as subject to the same gravitational principle — a character may dress to appeal to the patriarch’s eye, or dress to defy it, but they can’t escape its pull. Michelle Matland, the show’s costume designer, has described the Roy family as “anti-bling,” with Logan most clearly embodying that philosophy. His clothes are luxurious and perfectly tailored, but understated: custom suits by Manhattan tailor Leonard Logsdail, unbranded baseball caps and shawl-collar sweaters. When everyone knows you’re a billionaire, you don’t need your clothes to scream it, too.

Yet the fashion on Succession is well worth paying attention to. It quietly mirrors the Roy family’s delicious drama, giving a nod to who’s up and who’s down at any given moment. Nobody is as secure in their position as Logan — various takeover attempts aside — and in each character’s thirst for power, Matland has found an opportunity for wonderfully clever costuming. In the new season of the show, that’s most true of Logan’s second-born, Kendall Roy (Jeremy Strong).

Season three picks up in the immediate aftermath of the season two finale: Kendall, asked by Logan to absorb responsibility for years of abuses and cover-ups in Waystar Royco’s cruise division, has just torn up his press conference script and pinned the blame on his father instead. As battle lines are drawn, the Roys shed their suit jackets, pull off their ties, and roll up their very expensive shirt sleeves. To quote Logan, bellowing at one of his executives: this is war.

High on the adrenaline of throwing his father under the bus, Kendall is busy rebranding himself as an advocate for victims and “a defender of liberal democracy”. He wants the world to see him as a young, woke alternative to his father.

For Kendall, fashion is the perfect way to accomplish that. (“I come from a world of image. That’s the family business,” he tells a reporter.) Kendall has always been susceptible to the allure of overtly fashion-y clothes, and while he doesn’t abandon his expensive, subtle suits now, he frequently leans into clothing that’s more casual, fashion-forward and political, particularly in public-facing moments. For a television appearance, he goes for a relaxed, hip look in a burnt sienna corduroy zip-up jacket and sneakers. At a black-tie party, he wears a sleek dark suit with an Ai Weiwei pin on the lapel, aligning himself with the Chinese artist and activist.

Kendall surrounds himself with stylish young people too, most notably Naomi Pierce (Annabelle Dexter-Jones), a media heiress whose family business Waystar Royco tried and failed to acquire in season two. She has a mischievous presence with an undercurrent of real anger: plagued by Waystar’s tabloids as she dealt with addiction issues, she told Kendall when they met that “watching you people melt down is the most deeply satisfying activity on planet Earth”.

Naomi is the most explicitly and effortlessly fashionable character on Succession, with her blunt blonde haircut and penchant for monochromatic outfits with metal accents. One of her best is a strapless top, colour-blocked like a New York black and white cookie, worn with a big silver choker and wide black pants. She looks cool and current, a downtown girl dropping in for a laugh at yet another Roy family meltdown.

Season two featured one of the great makeovers in recent TV history, courtesy of the youngest Roy sibling, Shiv

The problem for Kendall is that his attempts at stylishness come off as embarrassingly try-hard. He has a knack for telegraphing his insecurity through fashion, not unlike his brother-in-law Tom Wambsgans (Matthew Macfadyen), who chronically outs himself as a middle-class interloper in the Roys’ moneyed world by misfiring on his clothing. (At a Sun Valley-type conference in season two, Tom’s overly puffy Moncler vest prompts the quip: “Nice vest, Wambsgans. It’s so puffy. What’s it stuffed with, your hopes and dreams?”) In the first season, Kendall unboxes a new pair of Lanvin sneakers on the way to meet an art start-up he’s considering backing, only to remove them halfway through the meeting after confessing that he feels like a dope for trying so hard to impress them.

He never learns. This time around, Kendall goes for broke at his blowout 40th birthday party, wearing a green turtleneck, a long chain necklace and a satin Gucci-style bomber with a UFO embroidered on the back. On someone else, it could be a good look. But on Kendall, who is so self-serious and hungry for success, it doesn’t land; Gucci doesn’t pair well with desperation. It doesn’t help that he spends part of the night harassing his older brother Connor (Alan Ruck) to take off his quilted khaki jacket, which Kendall claims is “souring the vibe.” 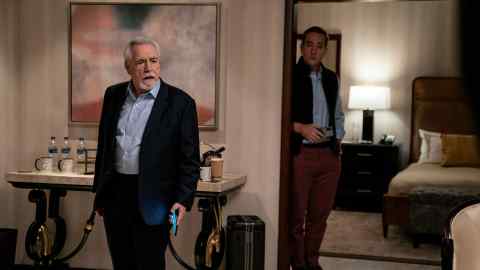 Kendall’s clothes may be the loudest of the Roy siblings’, but he’s not the only one using clothing to get ahead. Season two featured one of the great makeovers in recent TV history, courtesy of the youngest Roy sibling, Siobhan (Sarah Snook). Shiv, as she’s known, left her career in Democratic politics to start gunning for her father’s job — despite not having a formal position at the company — and with this power move came some inspired power dressing. She traded her long, tumbling hair for a sharp bob and swapped her soft, drapey clothing for a wardrobe of backless turtlenecks, strong shoulders, and high-waisted trousers. (Matland has cited Marlene Dietrich as an inspiration.)

After bungling her succession bid at a dinner with the Pierce family in season two, Shiv has a new job at Waystar Royco but is struggling to gain the respect of her colleagues. Her clothes are an evolution of last season’s look, but they’re slightly less bold, more in line with what the other women at the company wear. Corporate Shiv wears round-collar silk shirts under blazers, pinstripe skirt suits, and many shades of sand, taupe and cream. She’s not shrinking into the background — Shiv is confident to a fault, and her light colour palette is quietly eye-catching — but she’s playing it safe.

In the world of Succession, fashion is a fragile equation. Standout style can give a person strength, as with Shiv’s now-iconic trousers and turtlenecks, or it can highlight their weaknesses, as with most of Kendall’s bolder choices. Here, the clothing that carries the most clout is elegant and quiet — the kind of clothing that says you have nothing to prove. Arguably, Roman Roy (Kieran Culkin), the wittiest and dirtbaggiest of the bunch, does this better than any of his siblings, rarely deviating from a uniform of slim, dark button-downs and trousers. He is, after all, the Roy child most capable of appearing to let setbacks slide off him, with an eye roll that says he’s already bored with the conversation.

But it wouldn’t be very fun television if everyone dressed with that kind of restraint. May Kendall always succumb to the siren song of Gucci.

Logan Roy: the family patriarch embodies luxury without showiness, as though to say he’s got bigger issues on his mind. Logan goes for the business classics, with a slight touch of comfort: pinstriped suits, navy blazers, cardigans over collared shirts. While certain accessories show his age — suspenders, Croakies for his glasses — this is not fashion to be messed with.

Kendall Roy: forever trying to prove himself to his father, Kendall Roy is at his most convincing in sharp suits (think Brunello Cucinelli). But that doesn’t stop him from swinging for the fences in attention-grabbing styles like graphic tees, expensive sneakers, embroidered silk bombers and the infamous baseball jersey he wore while paying tribute to his father with his “L to the OG” rap in season two.

Siobhan Roy: after opting for soft colours and shapes in season one, Shiv adopted a power look in season two, with stronger, more sophisticated silhouettes. (Her turtlenecks and high-waisted trousers quickly became a fan favourite.) This season, Shiv’s clothing is, alas, less fashion-forward and more corporate, with a trend toward suiting and silk blouses.

Roman Roy: Roman, the court jester who seems increasingly serious about taking the top job at Waystar Royco, tends to go for a look that’s both high-end and work-appropriate, but with a casual wink. The quintessential Roman outfit? A navy button-down, sans tie, tucked into slim grey trousers.

Tom Wambsgans: despite his marriage to Shiv and high rank within Waystar Royco, Tom’s clothes betray him as an outsider. Costumier Michelle Matland has described him as a “peacock”, and for good reason. He’s doing too much: his suits are too obviously expensive, his pocket squares overly calculated, his hiking boots suspiciously clean, and his puffer vest the puffiest in the room. 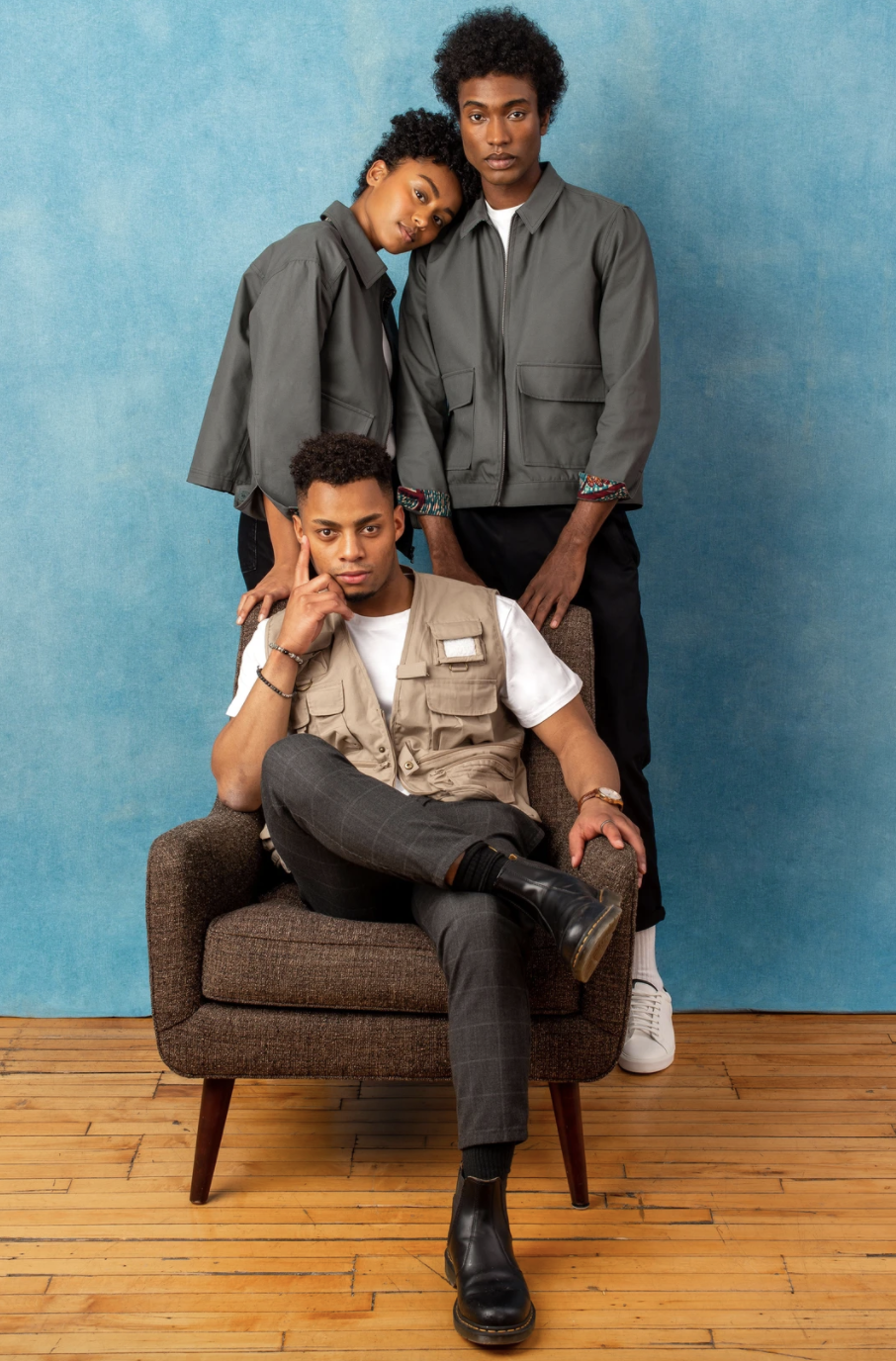