Skip to content
Upon first sight it just looks like a hardcase piece of luggage, albeit stuffed with a scooter. Can you just imagine the morning this human must’ve had to end up looking like this? I can. His alarm rang at 4:00 a.m. and his flight leaves at seven, which is enough time to just take a two-hour long blink. And now it’s 6:00 a.m.

You, on the other hand, are heading to work at 6:30 and see this guy in front of a hotel with scooter wheels coming out of his luggage. A smile starts to creep across your face and just before you’re about to laugh, you see the name Audi smacked on the side.

The young man looks down at this luggage, takes in a deep breath and grabs the handle, turns his luggage on its side and two wheels pop out, followed by a pair of handlebars and something like a seat. You see him get on and before you know it, he’s rounded the corner 50 yards away.

Your smile fades and you are sent into a whirlwind of confusion. You get to work and can’t stop thinking about this surreal scene you just witnessed. So, what just happened? 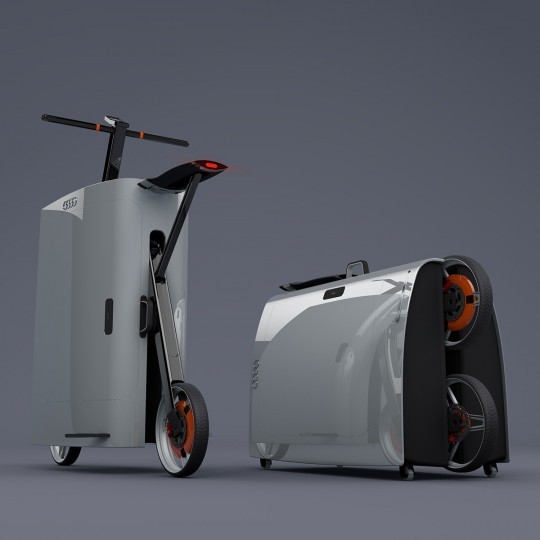 What you saw is nothing more than a concept vehicle meant to assist the urban traveler. Composed almost entirely of carbon fiber, the suitcase offers a lightweight yet strong design that should hold any human large enough to fit on it. But that carbon fiber also allows for an elegant and subtle design, taking into consideration it also hides a scooter.

The scooter function is deployed by turning the suitcase on its side and pulling the handle outward. An internal system pops into action when the handle and seat are pulled upon. The wheels and handlebars eject and you’re almost ready to go. The only other component that need the rider’s attention are the footrests.

I’m going to take a wild guess here and say that the scooter frame itself, not the suitcase, is also composed of carbon fiber. It seems to be the choice material for such oddly shaped contraptions. 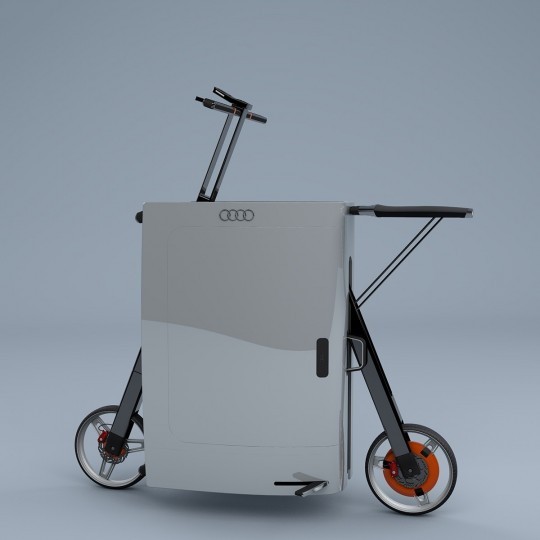 This entire contraption is powered by a lithium battery pack. But don’t bother looking for any sort of specs as it is just a concept. Nonetheless, we know what the designer had in mind when he set out to bring this idea to us; air travel.

This odd contraption is specifically designed to be used as a means to travel between terminals in large congested airports. Just imagine getting off your flight and hoping on your luggage to catch a ride to the next terminal. Pretty quick. huh?

Oddly enough, we found no hints of there actually being any room for your clothes in suitcase, nor do the designs show anything remotely indicative of a storage space.

So, then what would be the point to all of it? Maybe it’s just something you’ll get as a gift when purchasing a new Audi.