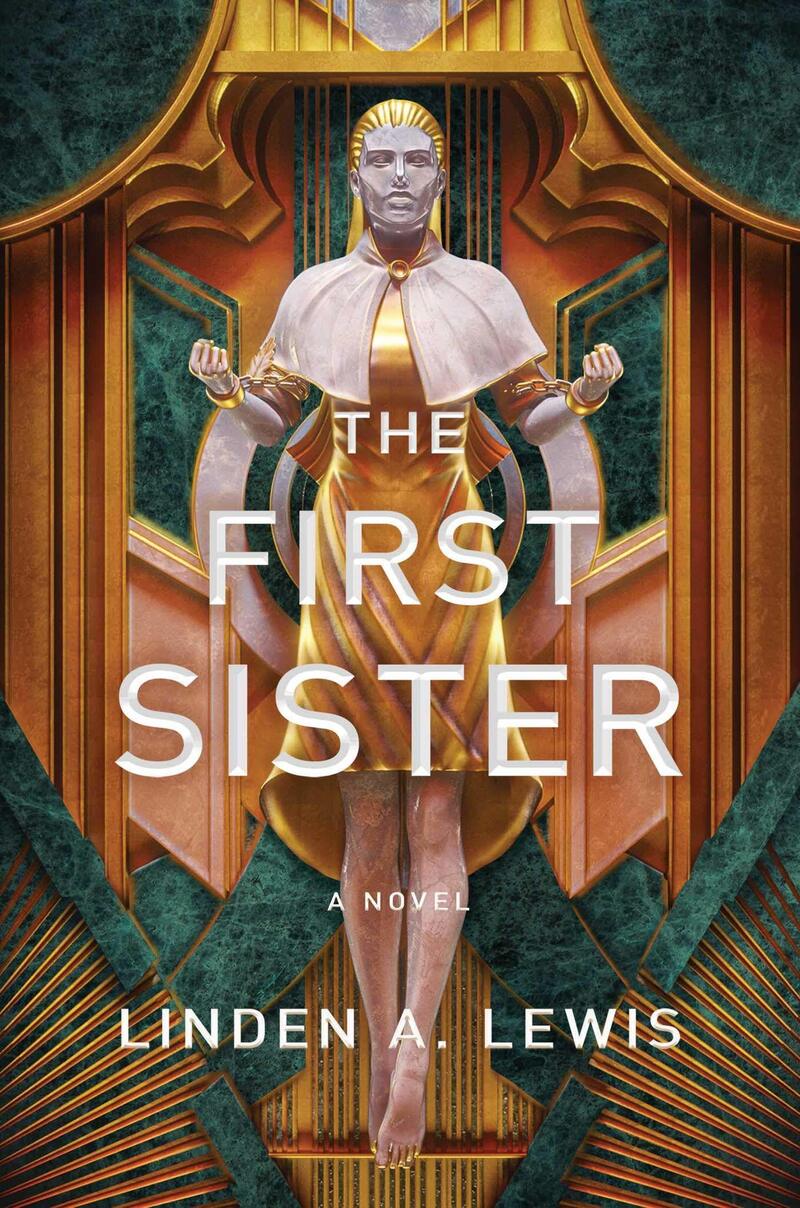 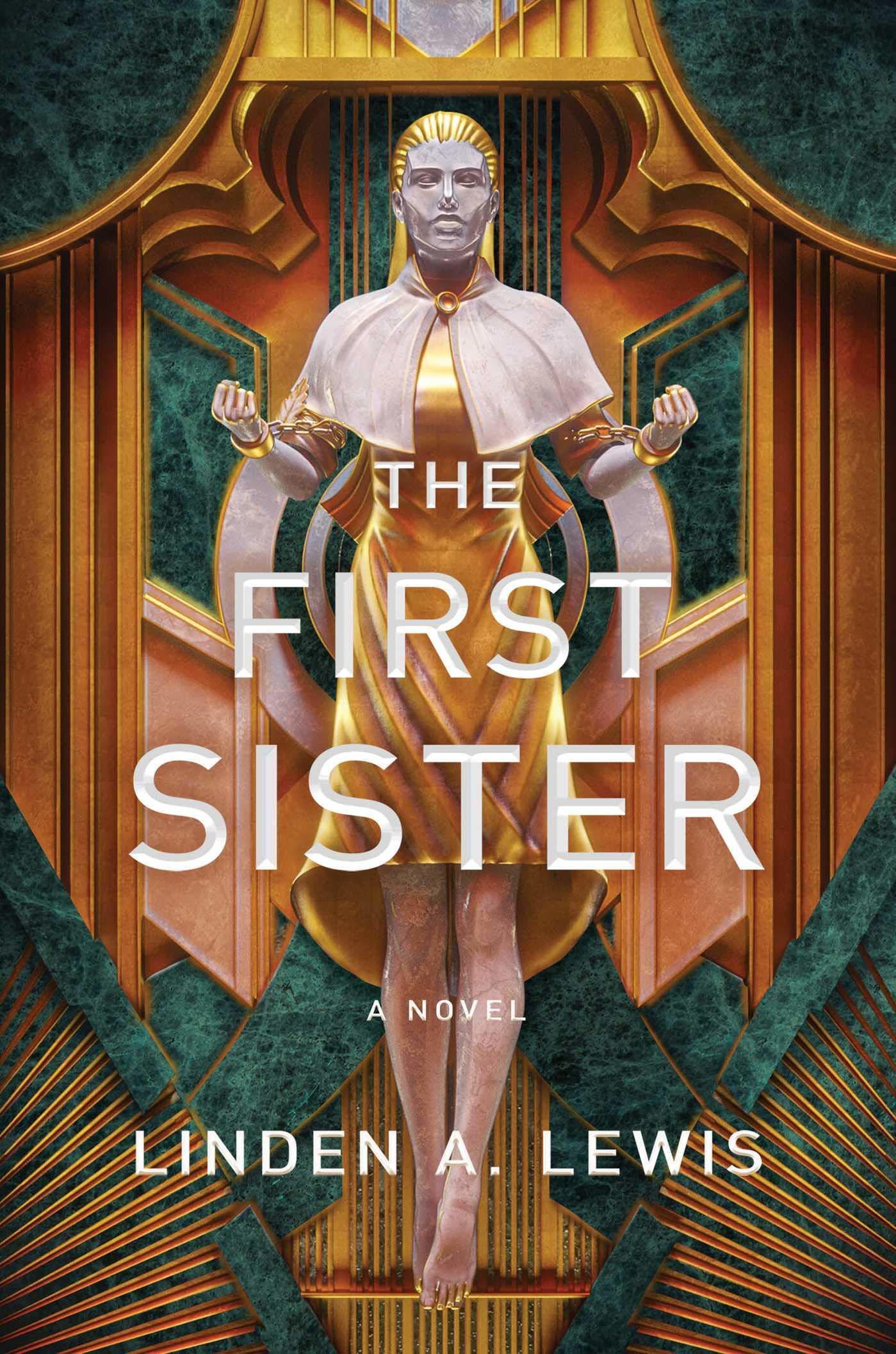 Linden A. Lewis’s debut novel The First Sister (book one in a trilogy of the same name) is a lot of fun, as stylish as it is substantial. Would you like your space opera with the social commentary and swaggery cool of Alexandre Dumas, with a dash of Cowboy Bebop and some awesome queer characters? Are you interested in political maneuverings and space economics, fantastically rich worldbuilding and sneaky spy stories? Read on. First Sister might be just the book you’ve been waiting for.

Lito and Hiro are Icarii, belonging to Mercury and Venus, as opposed to the Geans of Earth and Mars. Lito rose from nothing to become Special Forces, the Righthand — or “Rapier” — of an elite duelist pair. Righthands are usually paired with a Lefthand, or “Dagger.” Until recently, Lito’s partner was Hiro, a charismatic and rebellious person with a talent for skulduggery and a complicated relationship with their privilege. Hiro has gone rogue, so the High Commander sends Lito to finish Hiro’s assignment — and to kill them.

Meanwhile, the titular First Sister’s role is to act as confessor and provide wordless “comfort” for any Gean soldier — unless the captain claims exclusive rights by naming her “First.” Abandoned by one captain, she scrambles to keep her position when a new captain — the dashing hero, Saito Ren — takes command of the warship Juno. Then she is tasked by her Sisterhood with breaking their own commandments to report her captain’s secrets.

I pay sharp attention when an author gives us opposing ideologies without telling us which one is morally correct … I don’t know who is right or deserving, and I really love that I don’t know.

A difficult but necessary trick of worldbuilding is writing characters who are clear observers of their surroundings; this often means characters who chafe against what is even as they participate in it. The First Sister does this beautifully. The narrative stays tight on three viewpoints, so we are left with questions — in a good way — about what else is going on. Our protagonists are extraordinarily skilled, but powerless. First Sister literally has no voice; Lewis shows us power and how those who have it use those who don’t, what power looks like from within and without, and the consequences of systemic failures in different societies.

I pay sharp attention when an author gives us opposing ideologies without telling us which one is morally correct. The Icarii believe in augmentation; genetic modifications are common and soldiers get implants which allow them to communicate and dampen their emotions, making them supersoldiers with quicksilver blades. Geans worship what is natural, and rather than augment their bodies or tinker with their brains, their elite fighters use formidable battle suits called Ironsides. They are very cool, with “halos” that allow soldiers within to see what’s happening around them at all angles. I was particularly struck by an image of the Sisters’ handprints on the armor, coupled with scraps of fabric from defeated Icarii duellists. Considering what we learn of the Icarii-Gean conflict, I don’t know who is right or deserving, and I really love that I don’t know.

I do know I root for a third faction, the Asters, who are reviled and dismissed by Icarii and Gean alike. Asters are descended from people whose genes were twisted, centuries prior, for work in difficult atmospheric conditions. They are treated abominably, both openly and — more terrible — in secret. I look forward to spending more time with them in future books.

And speaking of future books, I hope we get a more nuanced look at First Sister’s character. There’s something interesting there, but it doesn’t quite come together. I found myself occasionally wondering what made her special other than beauty, and wishing the main female character’s shtick wasn’t “naive but beautiful and trapped by circumstance.” In the long run, pitying a character isn’t sufficient replacement for personality.

But I have high hopes for the sequel. There’s a great deal of heart in The First Sister, where the future is sleek and messy, saturated colors and gritty shadows both. The scientific marvels of the Icarii will stay with me, poisonous environment and physical bodies transformed, as full of glory as a sunset. The Gean longing for simplicity, their scavenger solutions in the face of few resources, feels very possible. And Lewis deftly touches on the excesses of fanatical belief: It’s wrong to take away somebody’s voice, and it’s a tragedy to force identity on anyone, and it’s a great wrong to be complicit in societal abuse.

The First Sister is also an enjoyable action-adventure in space with likable characters, engagingly cinematic visuals, and high Cool Factor. I came out of reading The First Sister keen to spend more time in Linden A. Lewis’ solar system. I want to see what happens next. Mark this series down on my “highly anticipating” list.